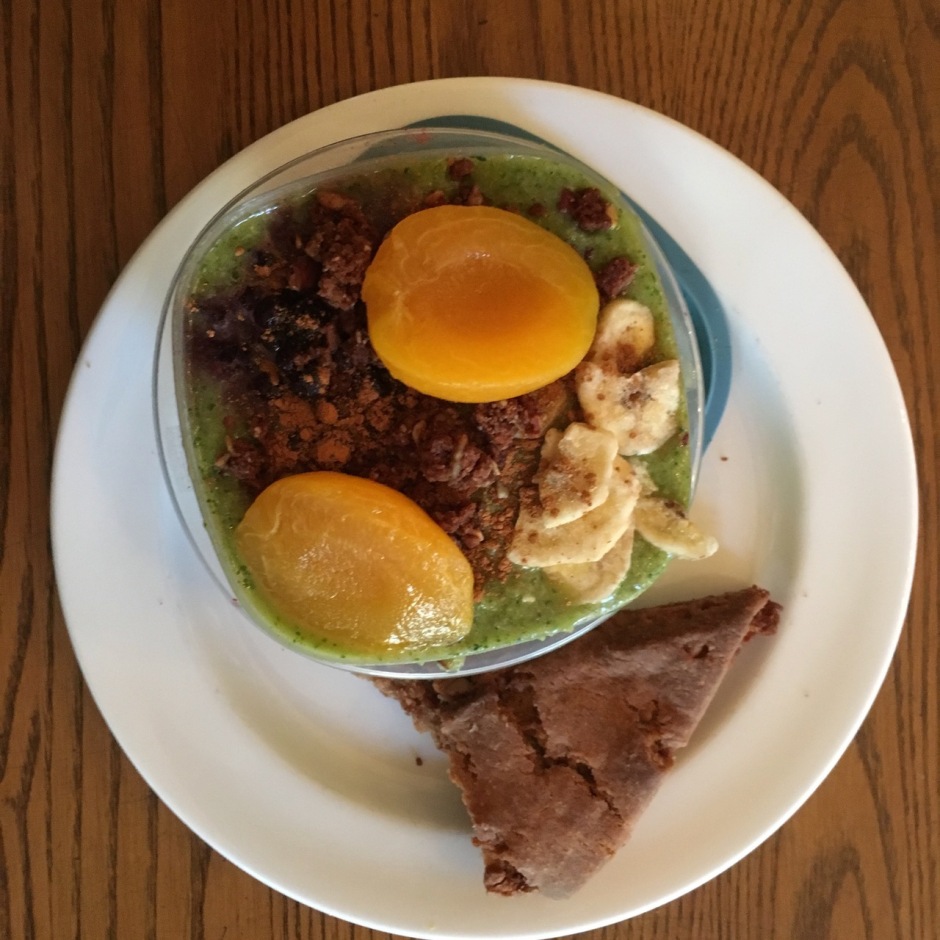 By Joseph Winters ’20
I love smoothies. Smoothies in the morning, smoothies for snacks, smoothies before bed—there’s no bad time for a smoothie. At home, they served two main functions: 1) they were a good way to eat more greens without even realizing it, and 2) they helped my family reduce waste by allowing us to use whatever fruits and veggies were lying around in the fridge, a little past their prime but still edible.
The ultimate dream would be for Annenberg to have a smoothie station, where students have anytime access to a fridge full of fresh ingredients and a quality blender. Unfortunately, that isn’t quite the case. As freshmen, we’re pretty much stuck with using whatever blender we can find in the dorm kitchens, or renting from the FDO.
Not to mention, the ingredients! I’ve swiped my share of bananas from Annenberg, but most smoothie recipes call for teeny amounts of things like chia or hemp seeds, apple pie spice, fresh ginger… Without frequent trips to Whole Foods, it’s hard to imagine being able to stock the right smoothie ingredients all the time.
That’s what GreenBlender can help with: they deliver weekly smoothie boxes, complete with prepackaged and portioned ingredients that go with five recipes (two servings per recipe—so ten smoothies per week). I was intrigued, so I emailed GreenBlender, and they agreed to send me a box in exchange for this review!
Here are the ways you can subscribe to GreenBlender:

My box arrived just before Thanksgiving Break, so the recipes were all Thanksgiving-themed. The ingredients were meticulously packaged in plastic baggies, with convenient labels for things I might not recognize, like maqui powder. Plus, I really appreciated that they weren’t the stereotypical smoothie recipes that you might find at some pseudo-health smoothie place, laden with just fruit and yogurt and honey or syrup; three of the recipes had greens, one had a summer squash, and one used sweet potato. No nauseatingly sweet stuff here! Also, everything GreenBlender sent was organic, which I thought was a great feature of their service.
Here are the five smoothies, with my comments:
Maqui Apple Cleanse
This smoothie was surprisingly delicious. It wasn’t too sweet, but very refreshing. I mostly tasted the applesauce, but the grapes gave it some tartness. The squash made the consistency a little fibrous, but that would have been remedied if I’d just blended it for a minute or so more.
1 yellow squash, chopped
5 oz grapes
1/2 cup applesauce
1 tbsp hemp seeds
1 tsp maqui berry powder
1 cup water
1 cup ice

Maple Almond Apple Pie
Many health foodies are familiar with the concept of the “açai bowl”, which is basically a really thick berry smoothie. But I don’t think the açai bowl needs to limit itself to açai berries as a base; I like to make “smoothie bowls,” which are basically smoothies with less liquid. That’s what I decided to do with the Maple Almond Apple Pie recipe that GreenBlender sent. I put all the ingredients into the blender as normal but omitted the cup of water. Into the blender went:
1.5 oz baby kale
1 tsp apple pie spice
2 apples, chopped
1 tbsp maple almond butter
1 cup ice
If you don’t have a powerful blender, I’m not sure this would work, but Vitamixes and Blendtecs should do the job handily! The consistency was a little meltier than frozen yogurt, and while it didn’t taste like a real pie, the apple pie spice definitely gave the smoothie bowl some holiday flavor, and—of course—the kale was undetectable.
I like this smoothie-eating method particularly because I could never drink only a liquid smoothie for breakfast—I’d be hungry within an hour. This way, I get some more carbs from toppings like granola (and a scone on this particular morning!), and a healthy schmear of peanut butter makes it a little more like an actual meal.

Cranberry Ginger
While it wasn’t bad, this smoothie was probably my least favorite of the smoothies I sampled. It was the kind of smoothie someone might accuse of tasting “healthy” in a derogatory way. “Healthy” is a taste I’ve acquired and come to like, but it’s definitely not for everybody. That being said, it still made for a nice smoothie bowl breakfast. I would have added more ginger than the tiny slice that came with the ingredients, though, since I could barely tell that it was there.
1.5 oz spinach
2 oz cranberries
2 dates
1 pear, chopped
1/2 inch ginger
3 tbsp walnuts
1 cup ice 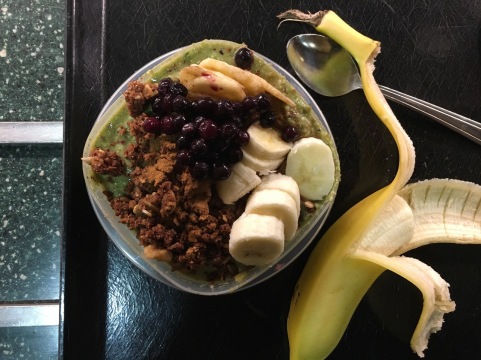 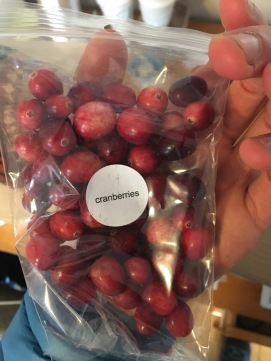 Pineapple Kumquat Passion
When I think of classic smoothies, this is what I think of. Super citrusy, pleasantly sweet, and deceptively green-colored. It was the first smoothie I made, and I shared it with one of my friends. She even woke up for a nap just to share in the smoothie-making. Both of us agreed that it was a quality sip of Vitamin C.
I also commented that GreenBlender helped me control my tendency to shove about five fistfuls of greens into the smoothie in the name of health. Doing this usually makes the smoothie extremely fibrous and completely unsatisfactory—with the recipe they provided, the smoothie had just the right amount of greens: still tasty, but with a healthy boost.
1.5 oz swiss chard
3 oz kumquats
1 orange, peeled
4 oz pineapple
1 tbsp chia seeds
1 cup coconut water
Maple Glazed Sweet Potatoes
This was the smoothie I was most excited to make. I love sweet potatoes, I love smoothies—what could go wrong?
4 oz raw sweet potatoes
1 banana
1 tsp cinnamon
1 tbsp maple syrup
3 tbsp cashews
1 cup water
1 cup ice 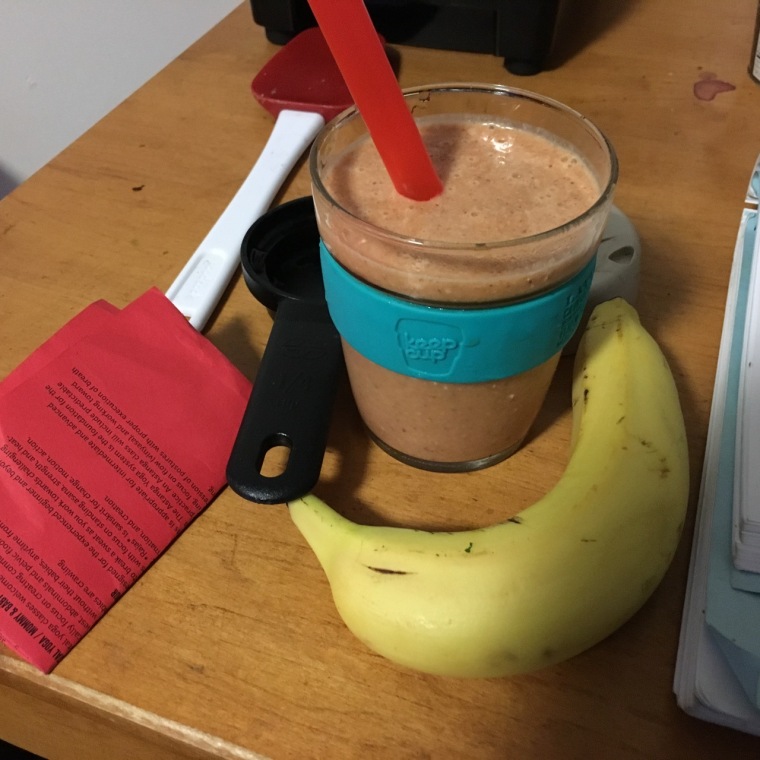 The outcome was amazing—sweetness from the banana, spice from the cinnamon, sweet potato-y goodness from the sweet potatoes. As with many banana smoothies, this kind of tasted like a milkshake. In fact, it was so good that, after my GreenBlender trial, I looked up the recipe and bought all the ingredients at Whole Foods so I could make it again. The second time, I had some extra coconut milk on hand, so I subbed it for the water and got a super dessert-like, creamy consistency.
After my week of smoothies, I was pretty sold on GreenBlender. I recently did a review of the meal delivery service Plated, but my conclusion was that it didn’t make sense for undergraduates on an unlimited, mandatory meal plan. GreenBlender, however, might make sense for those who are already devout smoothie lovers. They ease the difficulty of having to find quality smoothie recipes, go to the grocery store to find the ingredients (where you might have to buy a huge container of maple syrup even if you only need a tablespoon), and haul them back to your dorm kitchen.
Also of note is the fact that GreenBlender publishes all its smoothie recipes to its website! It’s definitely worth checking out, especially some of the candy bar-themed smoothies. Even if you don’t purchase your own subscription to GreenBlender, you can still make some killer smoothies from their enormous recipe index!
Website: https://greenblender.com/
Use the coupon code CRIMSONCRAVE when paying for a 20% discount from Green Blender!