Shortly before high school graduation, I got a ton of gifts from family and friends. There were Starbucks gift cards galore, outdoor gear, straight-up cash, and even a set of ultra-portable camping dishes. Probably the most interesting gift I received, however, was a microwave ramen cooker—make ramen in your dorm room, the packaging claimed. I grinned at the note included with the gift, implying that I would be eating a lot of ramen in the coming months.
The ramen stereotype is a funny phenomenon. It seems to me that a majority of campuses offer some sort of dining plan; despite the economic benefit of instant ramen packs, your average college student isn’t actuallyrelying on nightly ramen meals.
But, despite its bad reputation, ramen can be delicious. I’m not talking about Instant Lunch or Cup-o-Noodles, which are pretty bland and probably not the most nutritious options, but fancier, more hipster-esque ramen. If you’ve ever been to Wagamama, you’ll know what I mean. The other day, I was craving something Wagamama-like: the comfort of ramen, but in a healthier, more flavorful form.
Off to the grocery store I went, gathering some ingredients for my own version of the ramen stereotype. What I ended up making was delicious—a hearty, umami bowl of warm ramen with a little crunch and a little spice. It involves kale chips, which, if you haven’t tried them, are addictive. They’re basically a really convenient and “healthy” vehicle to ingest a bunch of butter/olive oil and salt. This recipe also includes soft-boiled eggs, which is another favorite of mine. If you’re a fan of eggs over easy, you’ll love soft-boiled eggs. The yolk doesn’t get all chalky and crumbly like it does in a hard-boiled egg—instead, it’s all melty and gooey. Of course, it can be substituted by a hard-boiled egg, but skeptics should definitely give the soft-boiled version a try first.

Ramen Redone — with Kale Chips, Carrots, and Soft-Boiled Egg
Servings: 1
Time: 30 minutes
Ingredients:
1 package ramen and spice mix (I used a millet and brown rice version from Lotus Foods, which I liked because it was whole grain and had only recognizable ingredients)
1 carrot
3-5 leaves of kale (vary depending on how much you like kale chips)
1 egg
butter or olive oil
salt
pepper 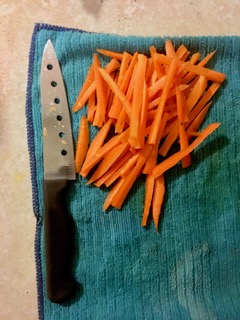 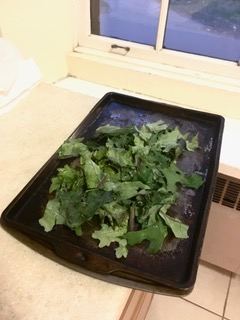