At 9am on a Thursday, I was a little surprised to see five Harvard students grinning as they stretched and turned (and stretched and turned again), a batch of sticky bread dough. This gooey mass, after it has risen and been braided, will become the sweet bread Challah, a traditional bread served at Shabbat dinner, or the Friday evening meal of the Jewish day of rest.

But the bread is not for them –save for a few furtive bites. 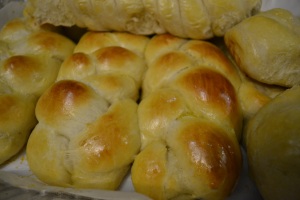 Headed by sophomore Amanda Jowell, Harvard’s Challah for Hunger mixes, bakes, and sells freshly baked Challah every Thursday evening at Hillel starting at around 6pm. The proceeds all go to MAZON, an advocacy group that works to bring nutritious food to the hungry in both the United States and Israel. And so far, so good: within the first four weeks of selling, Challah for Hunger has already raised more than $500.

The original organization founded about a decade ago, Challah for Hunger now exists on over 70 different campuses across the US, Canada, Australia and England. Jowell got the idea to bring CfH to Harvard after her twin sister started an outpost of the group on Stanford’s campus. Supported by Hillel, Jowell was able get the supplies and manpower together, and is now even able to offer different flavors of bread in addition to completely kosher Challah.

As someone who had never heard of the bread before, I had to ask: why Challah? The answer is quite simple. At Shabbat dinner, Challah is something expected, as the dinner usually begins with a blessing over two Challah loaves. In this way, the goal of CfH is to come together as a community to aid those who ultimately cannot take Challah on their dinner table for granted.

Making bread from scratch is a pretty serious time commitment (especially for a Harvard student), so it is only through community that the Challah makes it into the oven each week.

The Challah making process consists of four main parts: 1) mixing/kneading, 2) rising, 3) braiding, and finally, 4) baking. Following the procedure Jowell had already perfected by the second week of production, the process begins at 9am when about five to six Harvard students get their hands dirty combining the ingredients and kneading the dough.

Step two, rising, occurs throughout the day, letting the yeast metabolize as many sugars as possible, while the students attempt to digest their professor’s lectures. It is essential to let the dough rise for a significant amount of time, as it maximizes the amount of carbon dioxide and alcohol released into the dough (i.e. the dough magically triples in size). At 4:30pm, a new round of students comes to braid the dough

and then slather the loaves in egg wash,

essential for achieving the coveted caramel brown on top of the loaves.

Finally, the Challah goes into the oven, and is still warm when it is sold to the line of people already lined up and waiting for the bread to arrive.

At just $5 a loaf, the braided beauties are sold out within minutes. Just one bite into these pillows of soft, sweet dough, and you’ll know why. 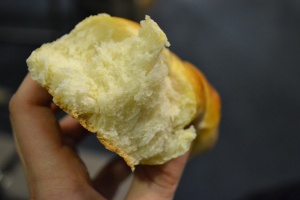