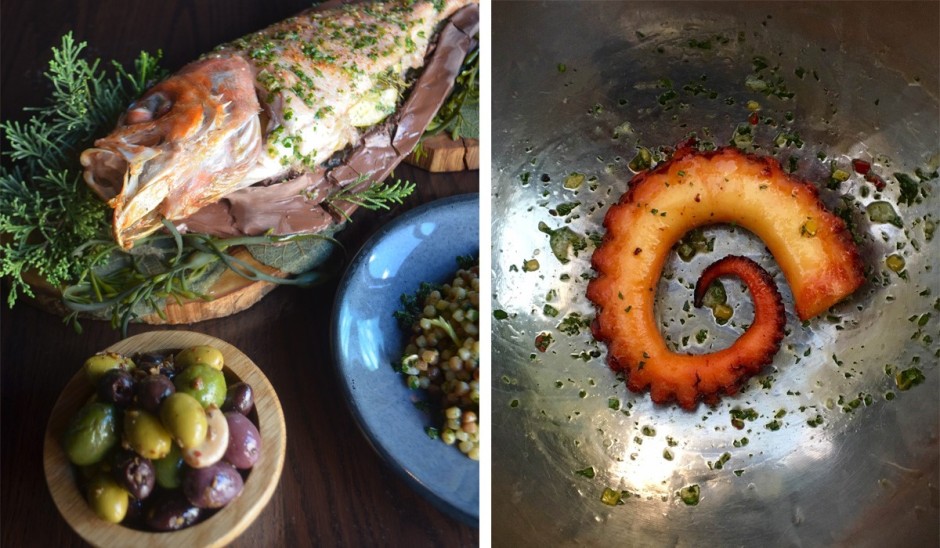 From the creators of two popular Irish pubs, En Boca is a Mediterranean small plates concept that will be opening in the space that was formerly occupied by Sandrine’s Bistro. Near the construction of the Smith Campus Center, En Boca hopes to open on September 29. Classic Restaurant Concepts manages the Asgard in Cambridge and the Kinsale in Boston and is entering Harvard Square with a drastically different restaurant model. With wine on draft and a focus on small plates, En Boca aims to provide an alternative dining destination with a similar model to Alden and Harlow.

The head chef, Devin Broo, has an impressive resume as he worked at Restaurant Daniel, a former three Michelin Star restaurant (currently has 2 Michelin Stars), Bar Boulud in Boston, and the Elm Restaurant in Connecticut. His menu covers a wide variety of Mediterranean cuisines with connections to Spain and Greece. While classic small plates like patatas bravas (hot potatoes), bacalou croquettes (codfish cakes), and wood grilled octopus line the menu, there are many intriguing dishes like byrek (spinach pie), stuffed baby squid, and slow poached arctic char. In addition to the small plates, there are larger shared dishes like an Acadian redfish baked in clay.

En Boca will focus on serving dinner on the opening date, but it hopes to eventually expand with a lunch and brunch program.

I am looking forward to visiting En Boca in the near future and sampling a wide variety of small plates, while lamenting at the fact that I cannot explore their wine program. 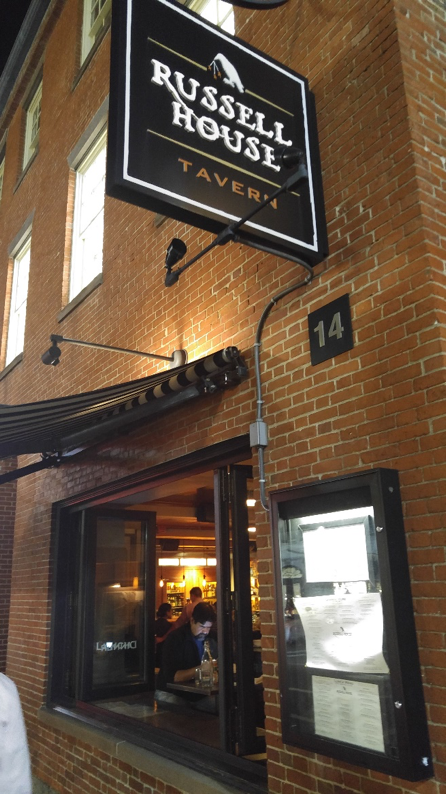 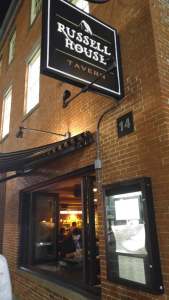 Taverns elicit images of energetic environments, buzzing with activity as waiters and patrons rush through the space. Russell House Tavern, a hot-spot in Harvard Square, fits that description exceptionally well with a stellar alcohol selection and inventive mixology. The tavern is frequently packed to capacity as a popular post-work destination for students and faculty alike. However, Russell House Tavern stands heads and shoulders above the stereotypical tavern by serving food well beyond cocktail peanuts and stale pretzels. Seven days a week, Russell House Tavern prepares inspired American cuisine with flavors inspired by global influences.

Walking down Kennedy Street, I could see that the restaurant was brimming as a queue extended out into the sidewalk. Fortunately, with a reservation for three at 9:30 pm, my party was promptly greeted by the host and seated. A quick view of the menu presented a diverse arrangement of exceptional bar food and eclectic entrees for a more complete meal. The menu was almost perfectly suited for a tavern, where large groups of people with unique preferences could gather and share portions. In particular, the pizzas on the menu stood out as perfect dishes to be split among a group. With a plethora of options, we began arguing which dishes to order and eventually decided on two pizzas and an assortment of other sharable small plates. 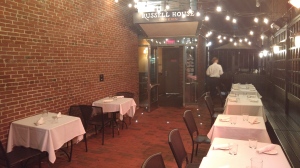 After an unexpectedly long wait (or maybe our empty stomachs made it feel longer), our hot and steaming pizzas arrived. Immediately, I grabbed a slice of the Cape Cod clam pizza ($13) and delivered it to my mouth. The strings of stretched cheese burned my hands and the sides of my mouth as the savory slice touched my tongue. In an odd way, the pizza reminded me distinctly of an incredible clam chowder. With the flavorful clam and rich pancetta mixing in my mouth with the melty cheese and white sauce, I was transported to the harbor, sitting over a steaming bowl of clam chowder. Breaking out of the daze, I hungrily took a slice of the heirloom tomato pizza ($14). To contrast the salty, savory clam pizza, the tomato pizza was perfectly sweet and refreshing. The namesake heirloom tomatoes had a complex sweetness and cleansed my palette with a juicy freshness. Combined with the flavorful burrata, a cheese made similarly to mozzarella, and marjoram, an herb with citrus notes, the pizza returned me to my senses.

Soon after, the small plates arrived: tuna tartare ($13), Jonah crab cakes ($13), steak frites ($25), and steak tartare ($14). The tuna tartare, a preparation where raw fish/beef is chopped into a fine grind, was a slight disappointment. While the tuna was clearly incredibly fresh, it suffered from an overwhelming sweetness from the melon. The crab cakes were similarly underwhelming, as there was a lack of seasoning. Strangely, the crab cakes were panko breaded, which helped the cakes keep their shape, but masked the flavoring, leaving a bland dish. 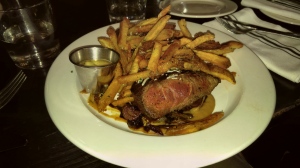 Personally, I was looking forward to the steak frites because it is such a classic French Bistro dish. Expecting a tender medium rare steak with crisp fries, I was mildly disappointed. The steak was a little too tough for my liking, and the fries were simply average. While well-cooked, there was something left to be desired in the dish. Overall the night so far was passable, but nothing spectacular. Until…

The steak tartare was presented with a golden deep fried egg and a peculiar black smear. The waiter explained to cut the egg open to release the yolk and then run the steak through the black smear and the egg yolk. Heeding his instructions, each of us gingerly placed the raw steak into our mouths. I closed my eyes as I chewed the tender steak disintegrated in our mouths and a savory flavor proliferated in our mouths. The gentle balance of the steak with the fatty egg yolk and spicy horseradish was excellent.

As the night wound to a close, my expectations were satisfied, and I am delighted that such a restaurant operates in Harvard Square. While some dishes were slight disappointments, Russell House Tavern is an establishment that I revisit frequently, due to their solid execution at later hours (12 pm Su-Th, 1 am F-Sa). For those looking for something a little more elevated at those hours, Russell House is a strong recommendation.