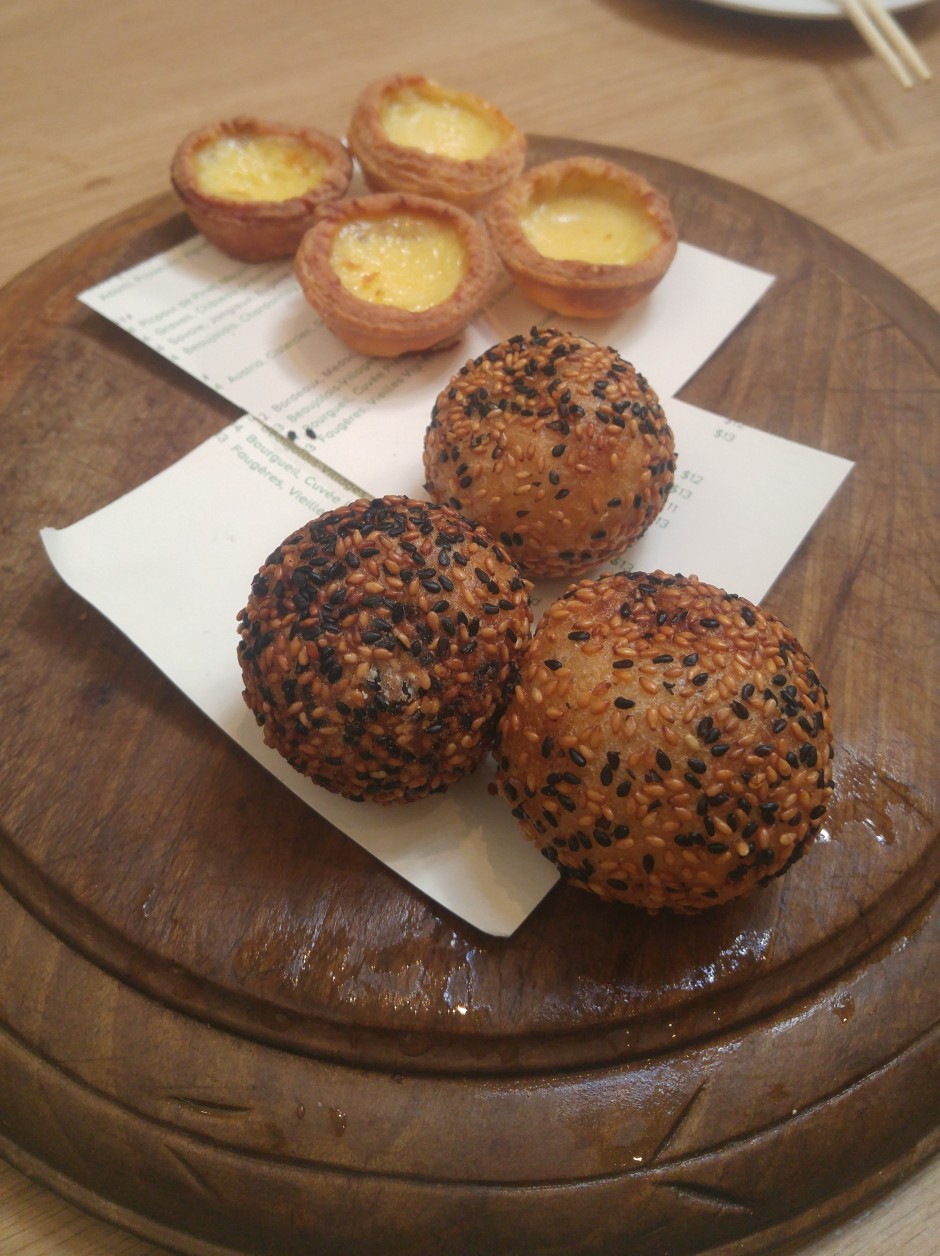 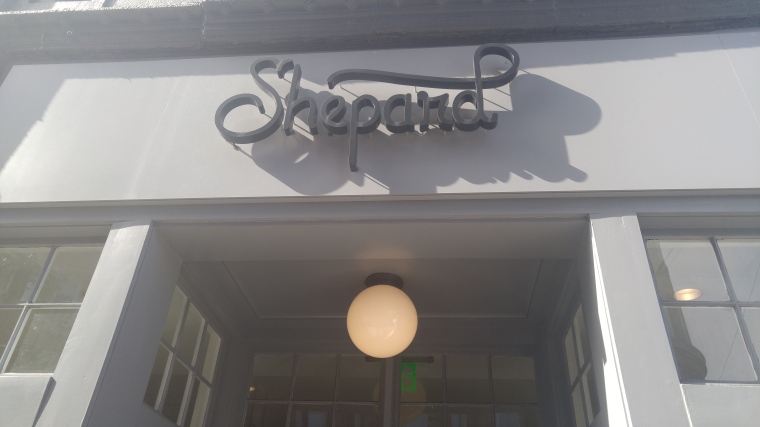 What exactly is a pop-up restaurant? Most people do not know this terminology, as they are a relatively new development. Pop-up restaurants are when kitchens are lent out to other restaurants or chefs for temporary residence. While this seems like an extravagant venture, many great restaurants (Mission Chinese, NYC) have emerged from pop-ups, and many great restaurants (Aliena, Chicago) have hosted pop-up sessions. Usually, the menu is specially prepared for each individual session. Thus, when I heard that Mei Mei was hosting a pop-up at the nearby Shepard, I quickly booked a reservation. 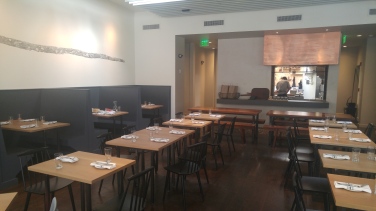 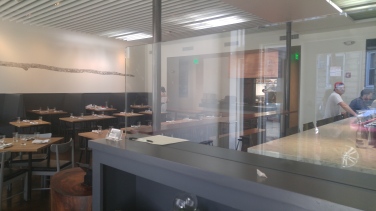 Entering Shepard, we were greeted by the two teams and were seated after a brief wait. Glancing at the menu, I was immediately drawn to the unique fusion dishes. However, glancing at other tables, I noticed that the portions were a little small and ordered accordingly. After we ordered a long list of various dim sum dishes, I waited excitedly for our mix of buns, dumplings, and vegetables. 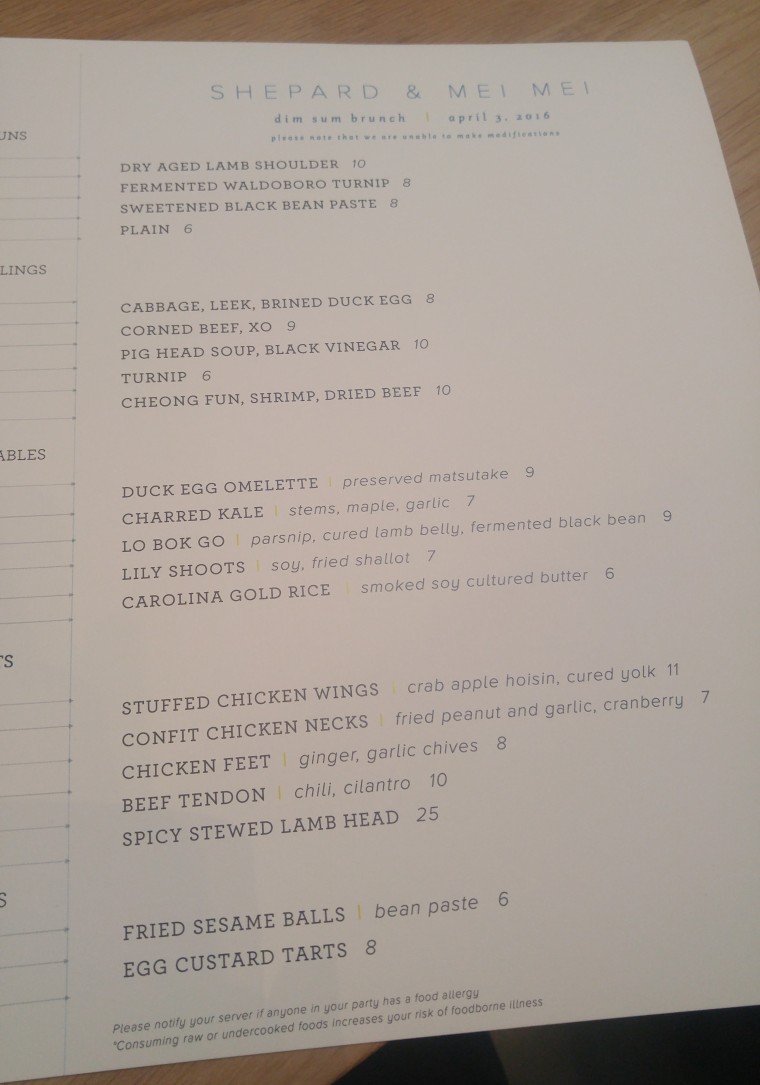 The dry aged lamb buns were a delicacy with complex savory notes of Chinese five-spice. While incredibly soft and moist, the order only came with three relatively small buns, which was unfortunate for my party of four individuals. Later, we would discover this applied to most dishes we ordered. The corned beef and xo dumplings similarly had rich, savory flavors, but texturally the shredded beef was not the most appealing. As the dishes continuously arrived, I enjoyed the mildly spicy beef tendon. The gelatinous texture melded perfectly with the crisp skin that garnished the dish. 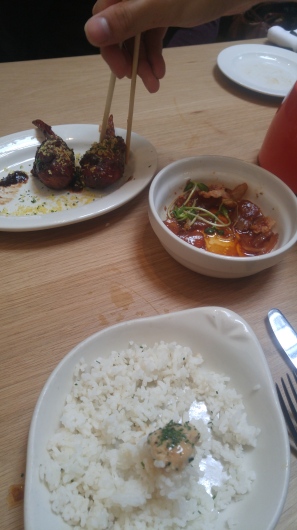 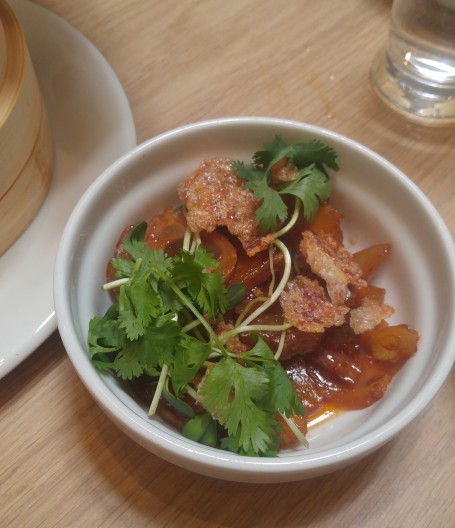 Still insatiated, I salivated as stuffed chicken wings and Carolina gold rice were placed at the table. Chicken wings filled with a smooth chicken mousse with a sweet glaze proved to be one of the highlights of the brunch. While rice may seem to be a peculiar dish to order, Carolina gold rice is a specific breed that garners significant national attention for its flavor. Anson Mills, a seed restoration group, found and revived this heritage breed and distributes it to many of the United States best restaurants (notably, Husk). Thus, I was excited to see them on the menu with a soy butter. While it may not taste empirically different, I had a profound appreciation of the crop, which may have altered my perception of the dish. 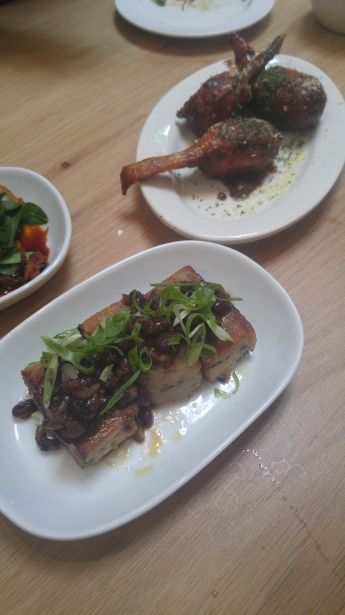 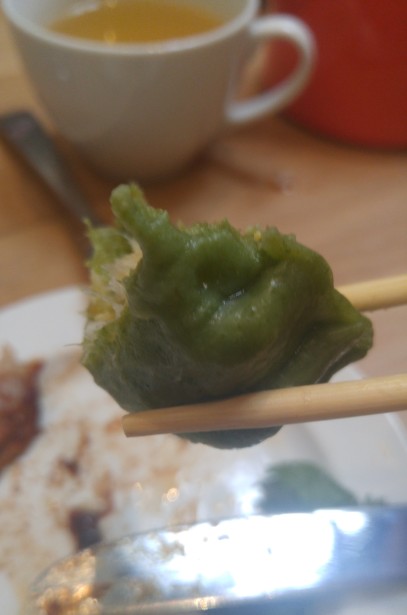 After these courses, we added rounds of cabbage, leek, brined duck egg dumplings, lily shoots, and lo bok go, parsnip cakes. Dark green dumplings quickly reached the table, and we dived in. Freshly steamed, the dough was stickier than I was normally accustomed to but were appropriate to hold the looser filling. While the lo bok go were respectable, the accompanying fermented black beans were truly delicious. A light acidity complemented the natural creaminess, and I snacked on them thorough the meal. My favorite dish of the day was actually the lily shoots with fried shallots. Dark soy sauce provided the perfect salinity for the chewy but smooth shoots. I honestly was tempted to order more sets of lily shoots with rice but instead settled with the select dessert courses. 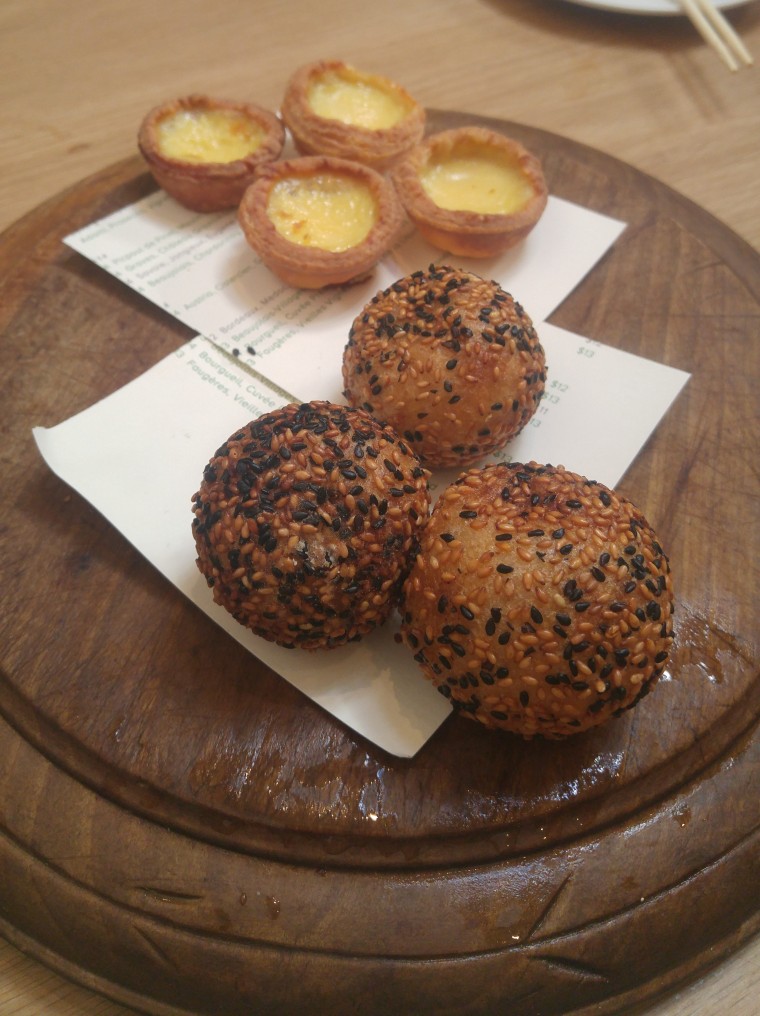 The fried sesame balls and egg custard tarts proved to be elevated versions, but nothing that truly affected me. Delicious and simple, we enjoyed them as a solid finish to the meal. Overall, I was slightly disappointed with the size of the dim sum and the unequal portions for the table. I expected that they could accommodate a table of 4, since that is a standard party number. Regardless, the dishes proved to be soundly delicious with a few notable standouts. Mei Mei is arguably one of the most important restaurants in Boston, and I am glad they decided to come nearby. Hopefully, they will return soon with yet another nuanced menu. Shepard is one of the newest restaurants in Cambridge, and I hope people will join them for dinner one day.

Feel free to contact the writer at boveyrao@college.harvard.edu with food musings, dining requests, or any restaurant advice! 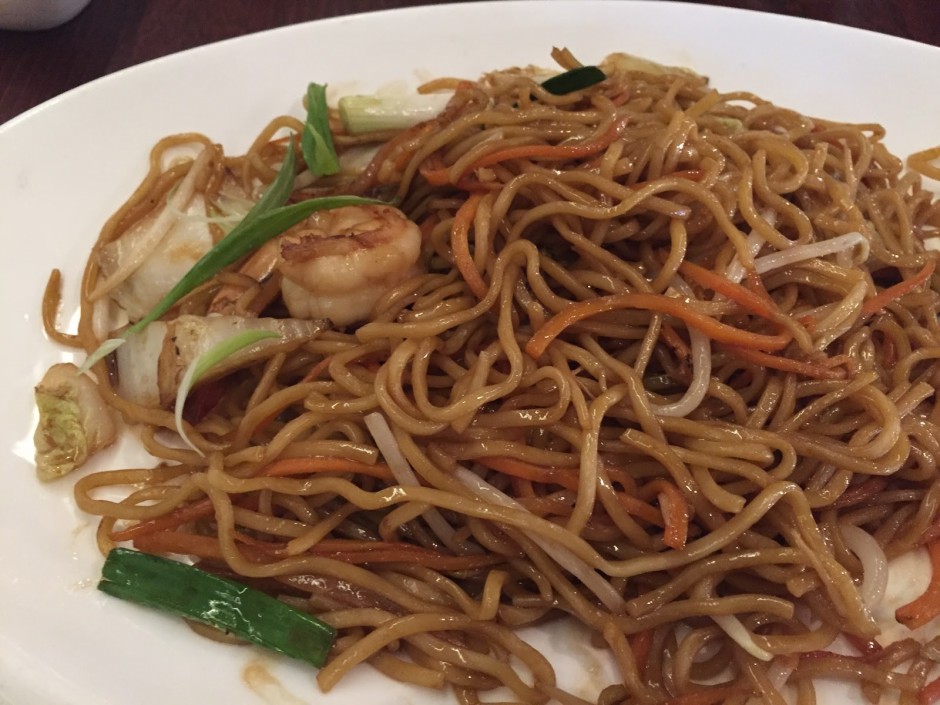 Last Saturday, I decided I had had enough of HUDS food. Don’t get me wrong; HUDS is great. Especially if you employ some of our dhall hacks. But after a rough week of midterms and papers, I wanted to treat myself. My friend and I decided on Mix-It, an Asian fusion restaurant on Mass Ave near the Quad/Law School. 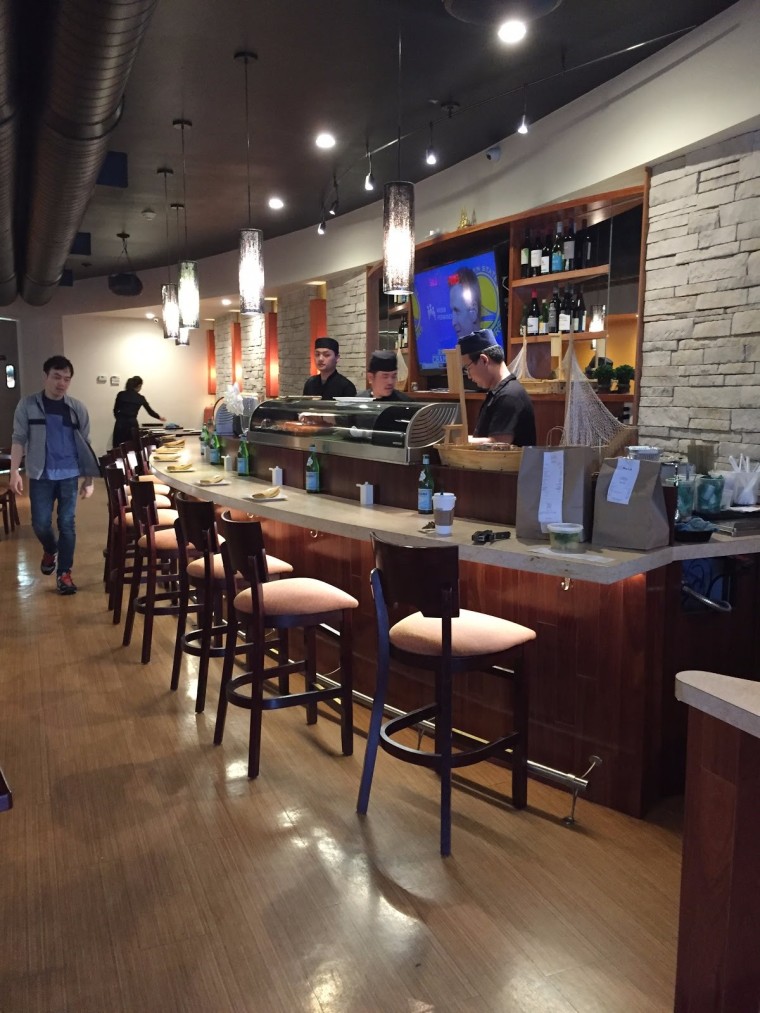 We arrived at noon, right when it opened. Although usually crowded during weeknights, we were able to enjoy a spacious and lengthy meal that Saturday afternoon. Craving some sushi, we each ordered a special roll – The Kiss of Fire roll and the namesake, The Mix It roll. One caveat, however, is that the special rolls were not accompanied by the staple miso soup and salad like the regular rolls were. When the sushi came out, we were disappointed by the portions. Initially, we thought they had only brought out one roll, when it was actually both rolls. The Kiss of Fire was also extremely spicy due to slabs of jalapeno. You might be thinking that I just have no spice tolerance. But just trust me on this one, I do. 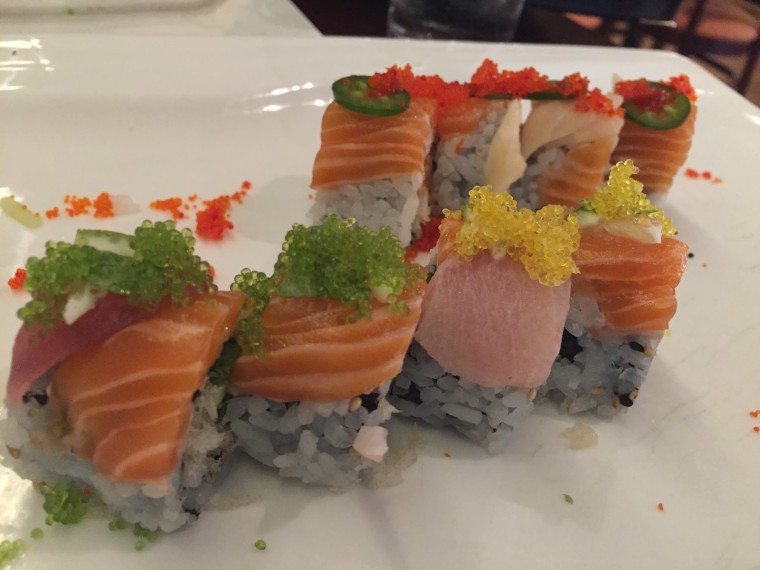 Still hungry after the meager rolls, we decided to split the yaki soba with shrimp. Service was pretty quick, however, as the noodles were brought out promptly. Although not the most photogenic dish, the noodles were decent. The shrimp was tangy, and the noodles chewy.  The sauce was a bit too greasy for me, though. 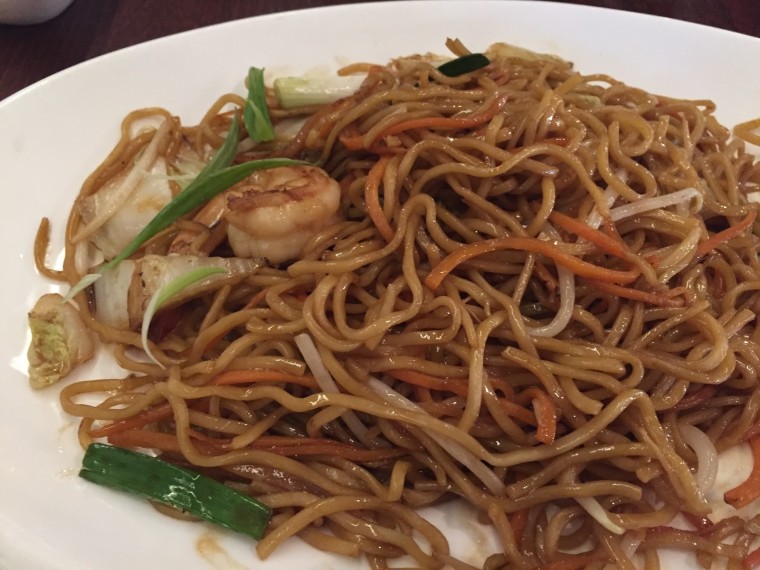 Overall, the lunch was satisfactory. If I had to recommend the place to fellow Quadlings, I would recommend dinner. Although more expensive, the atmosphere and food portions might be worth it.

There are times when only a big box of ribs will do. Usually those times come after days already full of excess. Country fair and fried Twinkie kinds of days. Emotionally laden kinds of days—days in response to which doctors exhort patients to “not eat their feelings”. Yeah, right. People have been eating their feelings since Eve took a bite of that nice apple. 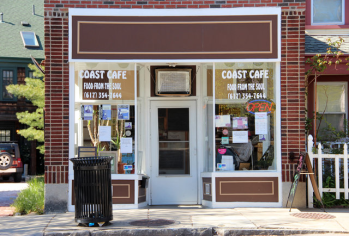 So I make a quick check of Yelp—these ribs better be quality ribs—and run out to the recommended rib joint on River Street named “Coast Cafe” and make my purchase: three whole pork BBQ ribs with a side of collard greens and string beans (to be healthy). When my order comes, it comes nestled in a styrofoam box, embraced by two pieces of aluminum foil. The heat sweats through the box and the plastic happy face’d bag.

When the box pops open, there it is: the meat tar glistening, fat smacking, heaven smelling rack of ribs that’s been waiting in the promised land.

Comfort food has existed for at least as long as fire and probably before (Mongol warriors stored raw mutton meat under their saddles as a quick pick-me-up snack—and invented steak tartare. Not long after came the chopped steak, and then the hamburger).

But what makes comfort food so comforting? Is it their hit-all combination of fat, sugar, and salt? Is it their connection with childhood memories? Louis Szathmary, the late Hungarian-American celebrity chef, theorized that men love hamburgers because the buns remind them of the maternal bosom. Whatever the “it” factor, we all recognize and are drawn to cues such as the sizzle of meat, the crackling of fries in oil, the sweetness of cream, and the carb-y heft of bread.

More interesting, however, is the question of what comfort food, well, comforts. The pure physical reasons we are drawn to comfort food involves its nutritional makeup. We crave carbs and fat as our body’s most readily used form of energy. It’s no coincidence that ready-to-use therapeutic foods (RUTFs)—products meant to treat severe malnutrition—often contain calorie dense peanuts, whole milk, and sugar.

Perhaps it is also not a coincidence Colonel (Harland) Sanders began doling out fried chicken dinners in front of a gas station in Corbin, Kentucky during the Great Depression. By 1938, Sanders went so far as to sponsor “relief banquets” for families on welfare; one imagines his chicken featured prominently. And then there are advertisements hawking products such as ice cream and french fries, screaming their ability to make people happy, loved, or even sexy. Something about comfort food goes deeper than mere bones and muscles.

The city of Cambridge’s great proliferation of educational institutions often mask the fact that it is a real city with residents who aren’t temporary collegiate settlers, and that the only available food isn’t from wood-paneled college dining halls. To dig deeper into the true meaning of comfort food in this city, we must venture beyond salad bars and serving trays and into the messy, gritty streets. As of 2012, 14.4% of all persons and 9.9% of families in Cambridge live below the poverty line. Historically, many of these people lived in an area known as “Area Four” (formerly a landfill), bordered on the north by Hampshire Street, on the south by Massachusetts Avenue, on the west by Prospect Street, and on the east by the Grand Junction Railroad tracks.

Coast Cafe, the Yelp-recommended rib joint, is located in Area Four. The “Coast” in the name refers to a now little-known moniker for the southern half of Area Four. No one is sure how Area Four got this nickname. Perhaps it is because the area bordered the Charles River. Or perhaps it is an ironic allusion to the upper crust East Coast college kids next door. One may never know the origin of the name, but perhaps we may guess at the origin of the food.

Boiled down to the bare bones, comfort food is poor man’s food—in all cultures. Cheap, easy-to-make, and above all, filling, dishes ranging from macaroni and cheese to meatloaf to fried rice both warmed the body and allowed thrifty cooks to use scraps from previous meals. Emotional connotations would have been quick to follow. Fullness equaled security. Security equaled comfort equaled love. Perhaps Szathmary’s assertions about the maternal bosom aren’t so farfetched; after all, the most idyllic childhood memories are centered around baking a warm, yeasty loaf of bread with mom.

Perhaps comfort food can never be fully explained. Its essence encompasses a myriad of textures and tastes: fat, salt, sugar, umami, creamy, slippery. It feeds all of our primal needs. But there is that mysterious way in which mere food—made of dead (or nearly dead) ingredients—can so easily transcend the physical and deeply affect the social and emotional realm. What happens in between?

That’s something to think about. But at the moment, my ape brain is wholly occupied by the steaming meal in front of me. I gnaw on the ribs, holding the ends with my bare hands. The thick meat sticks nicely between my teeth, the tendons crackle, and the syrupy barbecue glaze slithers between my lips. And the only word I think, or rather feel, is content.

This blog post was originally posted on The Harvard Advocate Blog. You can find the original article, and more of Faye’s work, here: http://theadvocateblog.net/2014/09/21/the-real-meaning-of-comfort-food/.