by Michelle Chiang ’19
Up, up, up we went, emerging from the bowels of the Roxbury Crossing T station. A brisk wind greeted us as we stepped into the cloudy sunlight. Across the street, the Reggie Lewis Athletic Center beckoned; a steady stream of people was already flowing through its doors. My parents and I hastened to follow.

In front of the athletic center, enthusiastic volunteers offered Bernie Sanders campaign material, but failed to distract us from our mission: eating at the Boston Vegetarian Food Festival. The front doors opened into a cramped lobby, which led to a narrow hallway, which led to another set of doors, which opened –
And revealed an large, open gymnasium, brightly lit, teeming with people and booths and vegetarian delicacies. The energy of the room was palpable. Some people walked through the aisles of booths like birds of prey, primed to swoop in on a free sample at any moment. Others meandered through the room in a more relaxed fashion, munching on things that they had bought from vendors.

I grinned and looked to my parents. We plunged into the chaos. 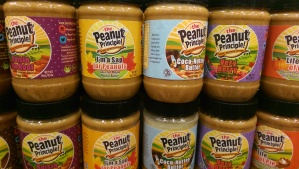 At first, I stalked the booths in a predatory fashion, darting through gaps in the crowd to grab free samples. Cashew butter. A dairy-free ice cream bar made of coconut milk. Hummus. Pumpkin pie peanut butter. Barbecue-flavored “hamburger meat” made of jackfruit. The variety of foods astonished me. As an omnivore, I never before realized how ingenious people can be when creating vegetarian foods. 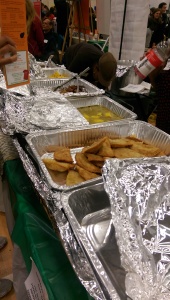 Gradually, as my hunger abated, I also began to focus on booths that exhibited non-food items. One table displayed children’s books that explained vegetarianism in a fun, kid-friendly way. Another table featured hand-made body products, including brightly colored soaps and fragrant balms. 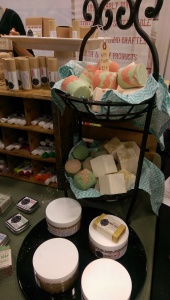 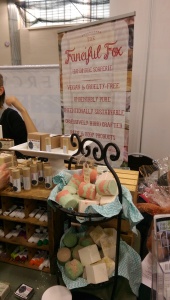 My parents and I had to leave after half an hour, but I could have stayed for the entire day. Yes, the free samples were amazing. But more importantly, I gained a much deeper knowledge of vegetarianism, something that I hadn’t previously given much thought to.
We walked back to the T station, stomachs full and mouths smiling.

I walked into the Reggie Lewis Athletic Center on Sunday afternoon and followed my nose to the gymnasium, where hundreds of vegetarian and vegan food vendors had set up shop. Let me start out by saying this: I am not vegetarian, nor am I a vegan. I love meat and I love animal products. In fact, I am usually skeptical of vegetarian and vegan food, especially when it resembles what I think of as ‘normal’ food. So what was I doing at a food festival that only served food of which I’m usually skeptical?

Well, I wanted to learn and I wanted to try new things. After all, most vegan and vegetarian food aims to replace their non-vegetarian or non-vegan counterparts, like cheese and meat. What intrigues me most about these kinds of foods is that if they are not actually cheese or meat or the like, then what are they?

The first food I tried as I entered the festival was nacho cheese dip from the O2 Yoga stand. I was surprised when it actually tasted like nacho cheese! Intrigued, I asked what it was made of: cashew, potato, carrot, shallot, onion, sunflower seeds, lemon juice, and spices. 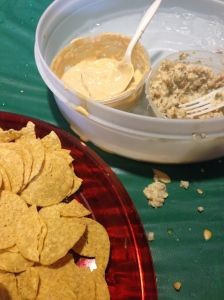 As it turns out, vegan “cheese” usually has a cashew base, as I found out from several other vendors who sold it. Nuttin Ordinary, another vendor, boasted cashew cheese spread made from 100% raw cashews and no added oils, which was delicious. The consistency was like that of goat cheese, and the flavor itself was very cheesy. A few stands over was Teese, which was also giving out samples of vegan nacho cheese with a cashew base.   All three “cheeses” that I sampled are available at Whole Foods, and all were delicious.

Many of the vendors were selling and offering free samples of vegan baked goods. FoMu, a bakery and ice cream store located in both Allston and Jamaica Plain, had an assortment of baked goods and ice creams. I decided to try their best seller, the Magic Bar, which is made of shredded coconut, pecan, vegan chocolate, and a dulce de leche base. It tasted like a tried-and-true, absolutely not-vegan seven-layer-bar. I kept telling myself that it was healthy because it was vegan, but there is no way that something that tasted so good was healthy!

Another standout bakery at the festival was Sabertooth Bakery, located in Jamaica Plain by the Forest Hills T-stop, which had a variety of flavors of vegan donuts, like butterfinger, Reese’s peanut butter cup, blueberry crumble, earl grey, powdered sugar and lemon, and peanut butter and jelly. I opted to try the PB&J donut, and it was one of the best donuts I have ever had. The consistency was different from normal donuts in that it was less cakey and more dense. In fact, it was almost like a muffin. Nevertheless, I was quite a fan.

I also had to sample a Mompop, from a vendor from Pennsylvania whose company is called—you guessed it—Mompops. Both vegan and gluten free, these popsicles are made of fruit, coconut milk, agave syrup, and water, and are only 89 calories. I tried the banana raspberry cream, and my friend tried the chocolate sea salt. Both were very light and refreshing.

To accompany all of the vendors who were selling vegan ice cream, there was also a vegan hot fudge stand. Coop’s hot fudge is made right here in Boston, and uses coconut oil and coconut cream instead of milk and butter. It honestly tasted just like real hot fudge. And if hot fudge wasn’t enough, there was also a stand for vegan whipped cream, with one variety made of rice and the other of soy.

The highlight of the festival for me and my friend was definitely the Dandies stand, which was giving out free samples of their gelatin-free, vegan marshmallows. My friend started keeping kosher a few years ago, so she had not been able to eat gelatin, and thus marshmallows until she tried Dandies’s marshmallows. Much denser and stickier than normal marshmallows, Dandies did not disappoint. In fact, I think I like them more than regular marshmallows. I’ll be sure to look out for them at Whole Foods.

Posha’s natural post-workout nutrition shake was the only sample I did not like, but I had known for a fact before trying it that I did not like plant-based protein powder.

Overall, I would say that my day at the Boston Vegetarian Food Festival was a success; I learned a lot about how certain specialty vegan and vegetarian foods are made, and I learned that I actually liked a lot of them!