Upon walking into what appeared from the outside a tiny store, I was excited by the vast and chic interior. Toting a wooden bench swing, almost lantern-like lights, both low and high tables, and an open connection to the bakery next door, the space is stunning.

When asked what flavours were available for their ice cream donut sandwiches the man at the counter handed me a menu of the four donut sandwiches offered and informed me that the red velvet had run out. That meant that made my choice easier. Now I was stuck between three options instead of four. Though the image of the Galaxy was visually stunning, I finally decided to get the Nutella and the Matcha. I ordered one of each to go. 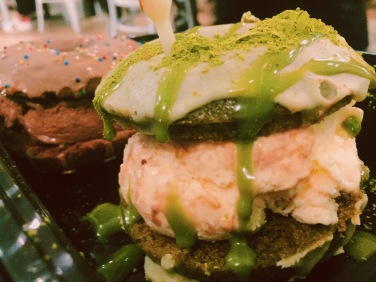 Processed with VSCO with c1 preset

I tried the Nutella first. The flavour was reminiscent of a dark hot chocolate and had an overall smooth consistency. There were no surprises to the bite. The chocolate donut matched the chocolate ice cream. The rainbow sprinkles on top gave it a bit of texture. It was not too sweet.

Next I tried the Matcha. The first thing that hits me in the strong matcha flavour from the matcha powder topping the donut. The vanilla ice cream complements the matcha donut well. The donut is moist and the matcha powder is delectable. It is sweeter than the Nutella and more unique. The more I eat it, the more I want.

As far as ice cream donut sandwiches go, I have reached the verdict that the two together are exponentially better than either alone. They’re my favourite couple this Valentine’s Day.