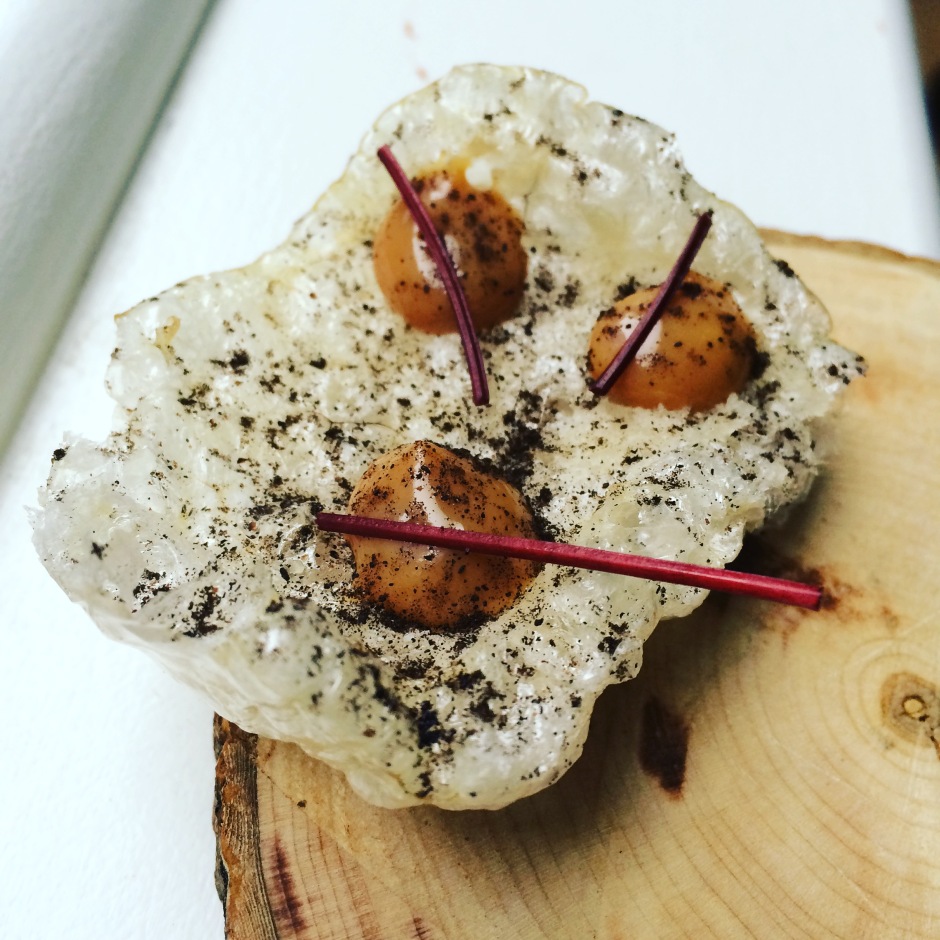 On a recommendation from my blockmate, I decided to escape the Harvard bubble and attend a pop-up dinner at an apartment in Central Square, hosted by Theory Kitchen.

After a cursory Google search of Theory Kitchen, I learned that the founder, Theo Friedman, is a recent Tufts grad with a passion for experimental cooking. While he was a student at Tufts, Friedman hosted several pop-up dinners and taco nights with the help of fellow students. In fact, for his senior thesis, he made a 20-course meal to highlight how the industrial food system disconnects diners and the people who make their food. After graduating, Theo took to operating Theory Kitchen full time, hosting pop-up dinners all over New England. No two dinners are the same; the menu and location change every time.

I knew this was going to be good. Anyone who finds time to cook anything, let alone a full gourmet meal, while in college must have a true passion for it! And Theo’s passion certainly translated into skill.

Although Google told me that Friedman was only 22-years-old, upon walking into the apartment, I was surprised to see someone so close to my age prepping an eleven-course meal. His workspace, complete with serving equipment as well as Tupperware containers filled with the elements of each course, was impeccably organized—even more impressive considering the kitchen in which he was working was totally new to him.

And then the dinner began. Before each course, Theo explained the story behind the food before us. The salmon dish, he told us, was inspired by bagel and lox. The last course, a kumquat and rhubarb fruit roll-up, was inspired by his childhood love for fruit roll-ups. In addition to deconstructing the story behind each meal, we were also able to watch them be prepared. This interactive environment with the chef himself created a level of intimacy in this dining experience that I do not think is possible at a restaurant.

Not only did each course have a unique story, but each also boasted unique flavors and textures. The first course was a warm sunchoke soup with cold scallops, both of which were savory, paired with sweet pomegranate seeds. Another course, a favorite among all of us dinner-goers, was a soy-flavored, poached egg, with yolk oozing over kale and crispy shiitake mushrooms.

Of note, in my opinion, were the desserts. This may be because I have an insatiable sweet tooth, but I found Theo’s three desserts to be especially creative. First came his grapefruit, fernet, and dill dessert. Never had I expected to eat dill for dessert, and in a meringue no less! Then came rice crispy treats, another childhood-inspired dish, which combined crispy pork skin and creamy dulce du leche. Finally was my favorite dessert: a chocolate and peppercorn cake with preserved strawberries.

The other event attendees, many of them also undergraduates, were just as in awe as I was of Theo’s creative cooking skills. Each course brought an exciting new combination of flavors and textures that we could not believe he had put together in such a deliciously harmonious way. Although we had all been complete strangers before the dinner, by the end, we had all shared a novel culinary experience together, and bonded over our admiration for Theo and his cooking.